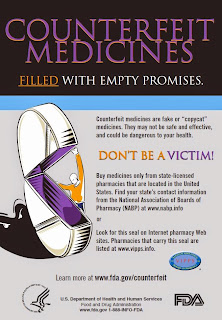 Since the outbreak of malaria became a big hit to the public, a lot of cures and medicines are produced and underwent intensive research to fight off this deadly mosquito bite. However though, also in the rise are counterfeit anti-malarial drugs distributed worldwide. Huge quantities of distribution go to underdeveloped and remote areas which have not enough access to authentic ones. Now they are out in the open as the government, different health organizations such as the World Health Organizations (WHO), United Nations (UN) and private institutes like ThePeterson Group take actions in defeating these fraudulent acts.

Where can they be found?

They can be found anywhere, but they are especially prevalent in developing countries lacking effective drug regulatory agencies as well as resources required to effectively evaluate drug quality or enforce drug quality regulations. Records show that there is a supply in cities like Brunei, Jakarta, Indonesia and Bangkok, Thailand in the recent years.

What types of antimalarial drug quality issues can be found?

Drugs with too little, too much, or absolutely no active ingredient, due to intentional fraud or poor manufacturing and quality control practice.

How can I avoid buying counterfeit or substandard anti-malarial drugs to prevent malaria when I travel to an area with malaria transmission?


•              Counterfeiters may also obtain expired drugs and repackage them with false or missing expiration dates.
Posted by Peter Anderson at 6:22 PM